Introduction:
Almost every day, somewhere in the world, a news headline calls for countries to adopt Opt-Out organ donation policies. Accompanying the call-to-action, is often a heart-wrenching story of a young child desperately awaiting a lifesaving transplant, or recipients seeking the help of their legislators to modify laws to make sure that all of us donate. The appeal of Opt-Out donation, often called Presumed Consent, is easy to understand when one’s empathy has been engaged. Enhancing this emotional appeal, proponents often leverage the power of data that identifies Opt-Out organ donation rates in countries such as Spain, Austria, and Belgium, being superior to donation rates in many Opt-In countries like the US, Australia, the UK, and Germany. I invite both sides to review what the data actually shows, when analyzed taking country’s death rates and their effect on donor potential into consideration. Articles supporting both sides will be referenced, and I will provide some data here to consider as we discuss this topic.

Background:
For more than thirty years, organ donation performance has been assessed internationally by a measurement of organ donors per million population (DPM). This statistic assumes that the populations of communities, regions, and countries have a uniform potential for donation. Thus, nations like Spain, Austria, and Belgium, with DPMs of 30-40 have long been regarded as world leaders, certainly as compared to Germany at 11 DPM and even when compared to the U.S.’s 31 DPM. However, the DPM measurement neglects to take into consideration the widely varying potential for organ donation among populations. Since, 2001, the U.S. abandoned DPM as a measure of organ donation performance, when Congress implemented a “Conversion Rate” assessment of donation performance that assesses actual donation as a percentage of Donor Potential.

Method:
As the conversion rate and donor potential measures are not available in other countries, the one commonly available statistic that has been correlated with Donor Potential is the refinement of DPM by adjusting for the variation in death rates of regions and countries. Applying death rates to donation rates in order to “normalize” the underlying potential for organ donation produces some surprising results. Additionally, because the U.S. has states with independent authority over their donation laws via their Anatomical Gift Acts and donation is performed by separate entities (Organ Procurement Organizations, OPOs) rather than a single national entity, this analysis includes US states that meet the size and minimum performance criteria of countries in its comparative analysis.

Discussion:
Table 1 includes 15 countries and US states with populations of 8.5 million or more and a minimum raw DPM of 10; the selected regions were included in order to assess the performance of Opt-Out vs Opt-In in regions with developed donation programs, populations large enough to have relatively stable Donor Potentials over time, and enough reasonably comparable range of geographies and diversity among both the Opt-Out and Opt-In regions.

The data identifies 9 Opt-In regions ranking among the 10 highest donation rate regions in the world, with the US state of Texas leading the world in 2016 with 43 nDPM and Pennsylvania second at 40, followed closely by the world’s long-regarded leader in donation, Spain, which has an nDPM of 40. Most significantly, the Opt-In average donation rate of 28.3 nDPM is 21% higher than the Opt-Out regions at 23.4 nDPM. 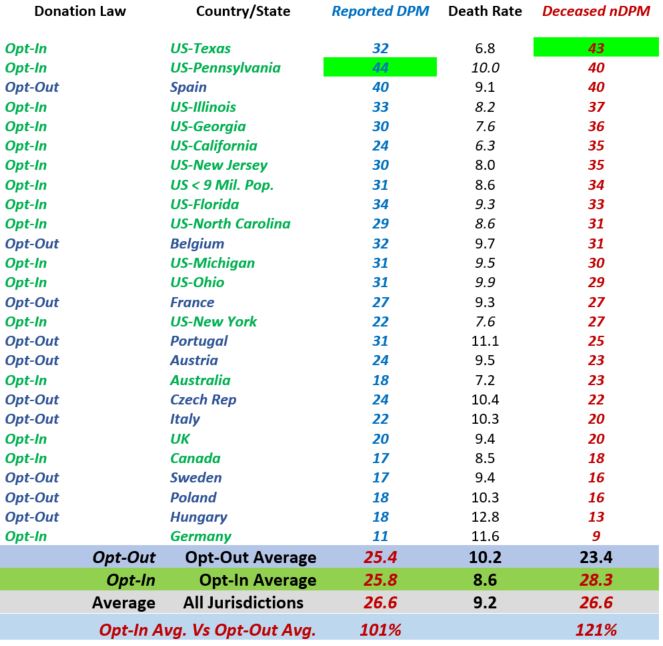 Opt-Out donation system has demonstrated an increase in donation in some countries, as noted in the seminal meta-analysis on the topic by Rithalia, et.al. Read the article at https://www.journalslibrary.nihr.ac.uk/hta/hta13260/#/abstract, despite being implemented “softly,” i.e. families are still asked and are able to object. However, the donation rates identified in this article remain well below world’s best practice levels, even after the implementation of Opt-Out, so they do not present a convincing argument for Opt-Out.

Why then, is Opt-Out organ donation not as effective as Opt-In among the leading donation rate regions of the world, when intuitively it would seem to be more effective? This question has been addressed by researchers and operators of Opt-Out regions in which all evidence points to the adoption and reliance on what is called “Soft Opt-Out” donation policies. Read Boyarsky, et al. article (http://journals.lww.com/transplantjournal/fulltext/2012/01270/Potential_Limitations_of_Presumed_Consent.2.aspx) to identified their findings through interviews with donation professionals in 13 Opt-Out countries.

In the US, more than 50% of the 16+ year-old population are registered as donors under state Anatomical Gift laws that recognize these registrations as legally-binding. Further, the majority of US OPOs rigorously enforce the donor’s wishes to donate when families object (usually by helping the family to understand and accept the decision but sometimes by recovering organs over family objections). As such the US has what might be called a “Hard Opt-In” system which appears to be a critical factor that makes the US Opt-In system more effective than “Soft Op-Out” as practiced throughout the world. 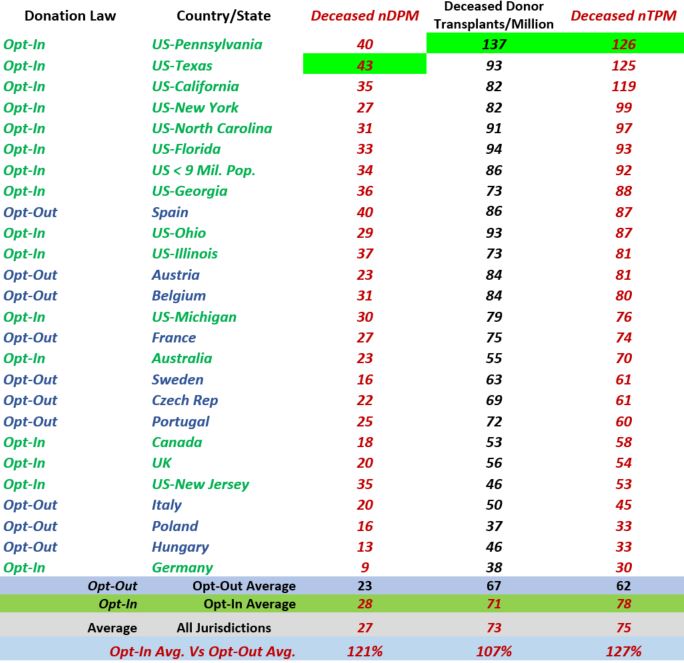 To discuss and explore this topic further, I encourage you to read the following articles, and then to address these questions:

The Alliance shares recent articles from credible media sources for informational and professional discussion purposes. We claim no authorship of such content, nor does it necessarily reflect the views of this organization.

X
We use cookies to ensure that we give you the best experience on our website. By closing this banner, scrolling this page, clicking a link, or continuing to browse this site, you agree to this use.OkPrivacy policy